12th June 2017 - While Heart of the Alien for CD32 has been re-released without enhancements, there's now a WB friendly package that includes Another World/The Lost Level with WHDLoad slaves, and an HD installed Heart of the Alien - no CD music required. 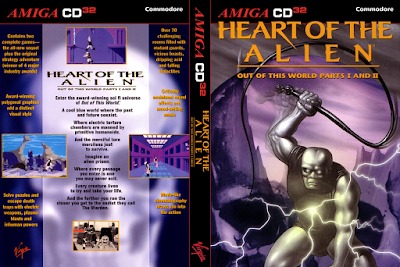 Another World / Out of this World: Eric Chahi
Heart of the Alien: Interplay (Adapted for Amiga by D.J.M)
Lost Level: Eric Chahi (Hacked on to the Amiga by Earok)
Cover: Steve
ISO Master: Earok
WHDLoad Slave: Harry and JOTD
Much appreciated assistance: Cobe

A long time coming! The legendary Another World mythos has finally made it's way to the CD32 in its entirety.

Another World (aka: Out of this World)
The original classic, with one minor tweak - Press BLUE to open the level code screen. If you want to skip through the lengthy introduction, just use the code "EDJI" after the (cracked) copy protection sequence.

The Lost Level
An entire level that was added to later editions of the game has been back-ported to Amiga and included on this disc as a standalone entry.

Heart of the Alien
The largely unknown and forgotten sequel makes it's way to the Amiga due to the incredible and much appreciated efforts of D.J.M.

Controls have been faithfully adapted from the Sega CD original.

Special thanks to Cobe for tweaking some of the Heart of the Alien audio tracks, as well as squeezing "The Lost Level" on to the selection menu.